The Battle of Algiers: Critique and Analysis 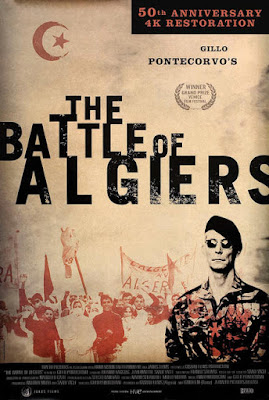 Question: It is often easy to think of innocence and guilt as clear opposites, as different as day and night. However, many of the texts and films we have studied raise questions about this opposition, suggesting that their differences may not be quite so stark. In your paper, discuss how a particular work complicates conventional ideas of innocence. You might consider the role of women or children in combat, or the differences between civilians and soldiers. Or, you might consider the ways in which individuals are held responsible for the actions of their nations and governments, or for the actions of those they hold dear (family members, lovers, etc.). Remember to pay attention to elements beyond plot and character, such as textual structure, textual repetition and tension, camera angle, light, and sound.

Answer: The Battle of Algiers is a great film with deep social and psychological effects it bears on the audience. With its powerful direction and technical strengths, such as camera, light, and sound, the film mainly focuses on the ways by which guilt and innocence become blurred in the path of achieving a necessary purpose: Freedom. The world has long sung songs for innocence to be an ideal state for peace. Women and children have historically found a central place in this narrative. However, by critiquing The Battle of Algiers, it could be argued that when faced with a significant purpose like freedom, innocence of people (men, women, and children) becomes blurred with guilt. This argument would be supported by discussing many a technique Pontecorvo has used to problematize this conflict by focusing on technical areas of the film, light, sound, camera work, and by highlighting the deep psychological effects different scenes bear on the audience asking them to follow Pontecorvo’s lead.

Now, we must revisit the first bombing in the film that was carried out by some French police officials to kill a suspected member of FLN. This explosion leaves a number of innocent civilians dead including men, women, and children of all ages. Their bodies in crippled forms are still in our memory as we compare this cute child being killed just in a matter of seconds. Certainly Pontecorvo is asking of all of us what we, as human beings, done to innocence. We also ask if the explosions by FLN activists would have taken place at all had it not been the first attempt from the French camp. The juxtaposition of civilians from both sides is artistically done to show us how complicated this relations between innocence and guilt is.
Similarly, when the last of the three explosion hits the race course, the French people running wild around capture the young Algerian boy selling candies in the race course. We are convinced that the crowd would beat him to death because their pain of losing their children and loved ones is so intense that the binaries of nationalism are forcing them to avenge their blood. Their instinct fails to see (as Pontecorvo again shows us) the other as innocent or guilty; it only wants revenge, blood for blood.
Overall, by drawing these strikingly painful comparisons of the acts of violence by both the sides, Pontecorvo invites us to debate the part violence has historically played in the struggle of oppression and freedom. Pontecorvo shows us that the side effects include innocent blood on both sides whether or not women and children take part in the struggle to kills each other. I personally believe that though we have moved into a time beyond postmodernism, I do not think such debates of sensitivity to innocent blood has done any good because a number of critics today ask the same questions of the deaths taking place at this moment in regions like Iraq and Afghanistan in the aftermath of the lives we lost on 9/11.
Pontecorvo tried to justify the element of violence through the words of Ben M’Hidi who says to Ali that terror attacks can serve for useful starting points but at the end the importance is of organizing the populations to order:
...wars cannot be won with terror attacks. Neither wars, nor revolutions. Terrorism is useful for starting a process, but afterwards the whole population has to act. [1:07:30-43].


This point may be of great importance, but personally my interpretation of the role of women and children in this film is that innocence remains at its place when other environmental forces go in balance. Once the balance is out, the boundaries between innocence and guilt can very easily blur on both sides. Since the same attitude has continued into our modern time, it is worth asking if we have done anything intangible to address the great loss innocence has suffered at the hands of humans around the world.
at November 22, 2017